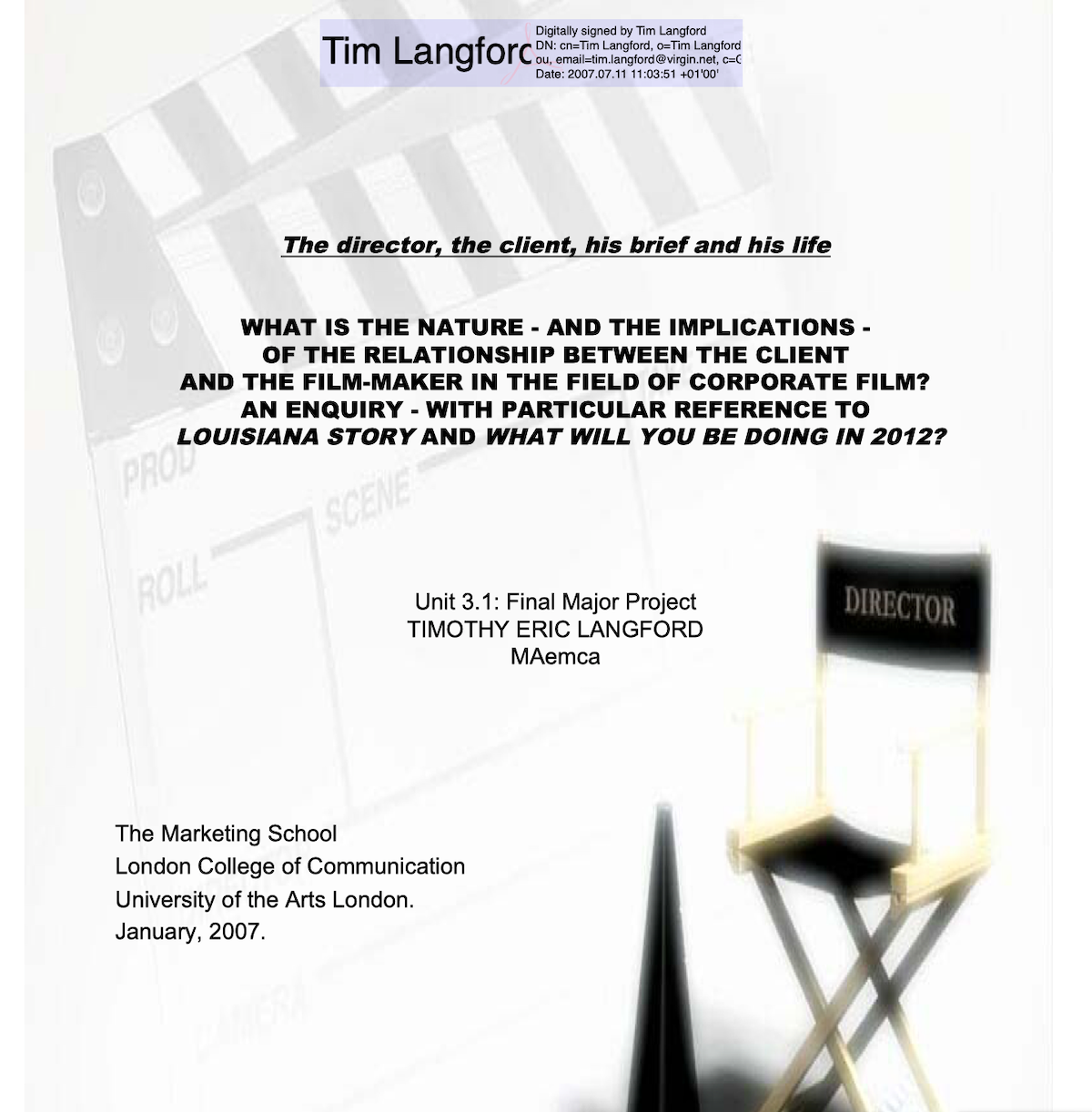 The director, the client, his brief and his life (rambling thoughts from my film-making career)

For a long time I had an obsession with the nature of the relationship in corporate film between the client and the creative. Here's the critical point - The commissioner (client) requires “art” that serves the interests of their viewpoint: The film-maker needs “art” to serve the interests of their own viewpoint. Discuss...
None of what I am about to talk about would ever come up in a meeting with a client in the following academic derived terms but what I am writing about is absolutely critical &  fundamental to the client/film-maker relationship and the work itself. So -

Here are some thoughts about the relationship between the creative (in this case film-maker but it could be any creative practitioner) and the client (the one who is paying for all that inspiration) - I have pulled these from my 2007 university thesis called the 'The director, the client, his brief and his life'. Yes, not very PC but then it was my perspective plus I had 'lifted' Peter Greenaway's film title 'The cook, the thief...' as the inspiration for my own. Shameless.

The thesis was based on comparing two corporate films from two era's in the form of two case studies - a film by Robert Flaherty called Louisiana Story from 1947 and funded/sponsored by Standard Oil (as was - now called Exxon-Mobil) - and a contemporary film produced during the gradual build-up to the olympics, London 2012, directed by Perry Miller, produced by Rob Vincent of Hawkshead (now defunct) for their client London 2012.

Here are a few extracts. I've highlighted the points I want to draw your attention to -

(from the thesis) My HYPOTHESIS

All corporate film begins with a client brief which identifies their need. At the heart of this are the messages that a client wishes the creative practitioner to convey; which, in turn, represent the objectives and aims of their organisation, conforming to its brand identity, values and corporate strategy. The client’s view of the creative solution needs to account for the broader organisational strategy.

The client needs to communicate information (in the fulfilment of their communications objectives). Information – facts, figures, arguments etc. – is, itself, presented in the clients language of corporate communications and forms part of their territorial interests. The film-maker employs a different language – reflecting the grammar and techniques of their medium and profession (and territory) – to convert the client’s information into the visual language of the film/video medium. They are speaking in two languages: hence, Perry Miller’s comments about engaging in a dialogue with a client who knows about stocks and shares and Flaherty’s adaptation of the clients messages into a form of artistic language. The effect of this is to open a gap in the relationship which then has to be progressively closed by adjustments of both parties in their respective orientations. Flaherty skewed the film towards his own position but the terms and conditions of the modern marketplace demand that the film-maker adopts the client’s agenda.

THE CHALLENGE THE CLIENT SETS & THE ISSUE OF CONVERTING 'INFORMATION'

The film-maker is implicitly set a task, by the client, in converting hard information into visual information, adapted to the corporate film medium (often shorter than a typical television programme) as a form of creative treatment. This is the challenge and the puzzle, but it also potentially sets up the field of conflict between the two parties. Precisely because, for example, information (the client’s territory) – compared to a print medium, which is information rich – has to be edited out, shaped and adapted to conform with the demands of visual expression (less information rich) and the needs of the director’s medium. The issue for the client is to adapt their position and viewpoint to the medium’s characteristics and director’s interpretation. The issue for the film-maker is to channel information into visual expression which is consistent with the client’s brief and messages but also remains true to the practitioner’s treatment/approach.

Trade and negotiation implies a trade between the parties involving some form of negotiation (Ettema 1982). In a ‘partnership’ (collaboration/shared ownership) power is shared – expertise, skills, authority – but there appears to be a trade between different (and sometimes aligned) perspectives. This complicating set of factors requires a trade of information and its conversion to the director’s medium; a trade between notions of a film versus a communications solution; between creative vision and the client’s criteria of meeting communication objectives; and a trade between controlling factors, the client constraints imposed by the brief and the practical effects of these, versus the creative need for some autonomy (in terms of working practices, professional creeds etc.). Within such a negotiation some form of compromise will follow. The nature of corporate film regulates the environment for both parties but particularly for that of the film-maker. This calls for a set of strategies involving adaptation to the medium and the clients message.

*There are two languages involved which reflect two contrasting perspectives and the corporate process from brief to film is a form of interpretation or translation. This leads to each side aligning and sometimes re-aligning their positions throughout the process.

*The creative is an 'interpreter' of the clients information.

*They convert client information and messages into visual/narrative information.

*Each of these is territorial.

* The relationship is a form of trade or series of transactions on many levels (aside from a business transaction) whereby a negotiation continually takes place.

*The client’s view of the creative solution needs to account for the broader organisational strategy.