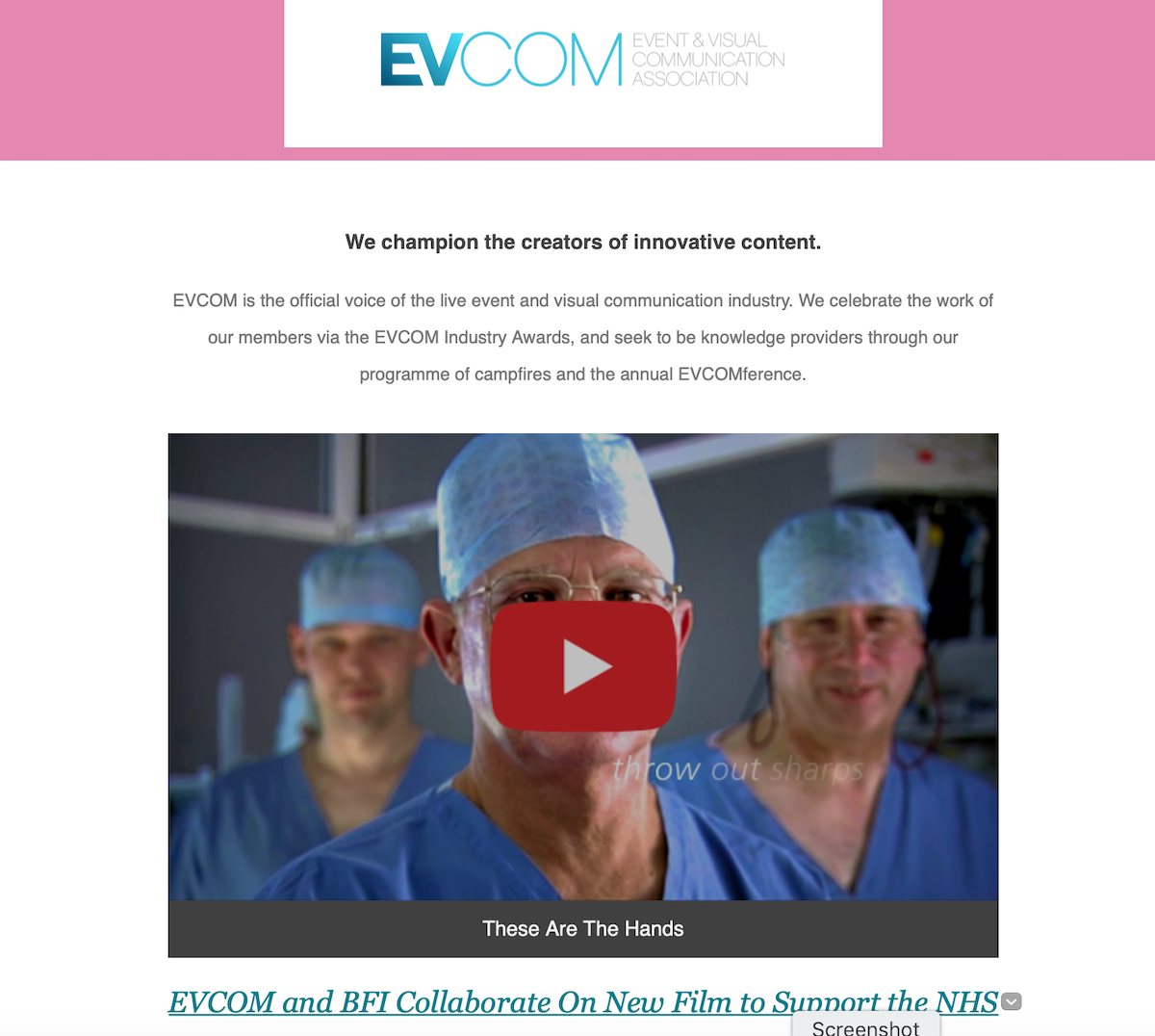 Reflections on - These are the Hands

Brene Brown made a decision  'to live in the arena' because previously she had 'engineered smallness'. And because we live with a great fear of shame.  As she says 'You have to be vulnerable to be brave'. Show up and be brave. Dare greatly. But there's a caveat: Be warned  - you will know failure. And heartbreak.

Which brings me to These are the Hands that you can read about here -  https://www.evcom.org.uk/news/evcom-and-bfi-collaborate-on-new-film-to-support-the-nhs

These are the Hands, on reflection, was a project which was about stepping into that arena with that attendant fear of failure and the heartbreak that would surely follow. It began with a 'back of an envelope' idea, a 2+2 = 4 moment after I heard one verse of a poem called 'These are the Hands' by poet Michael Rosen read out on Radio 4 in the early part of April. That lightbulb moment just fired me up. With a passion. With a desire I haven't felt for a very long time. It propelled me to 'step into the arena' by pitching the idea to colleagues on the board of EVCOM. Three in particular - Claire Fennelow, Andrew Smith and Sara Cooper listened. Without them it was dead in the water.  I needed their validation. I feared they would disapprove. I feared the shame of their disapproval. I pitched it to Patrick Russell, the Head of Non-fiction film at the BFI. He listened. Without him it was dead in the water. These 4, early on, were the foundations of support I needed to carry this forward.

There were so many challenges, so many hurdles, so many unexpected moments in the 4 week life of These are the Hands.  I needed a great voice-over artist. I wanted a top actor. Many turned it down or I just couldn't get reach them. I needed Michael Rosen's  (who was gravely ill)  permission and blessing and his agent took an eternity to get a decision and then said we would have to wait.  It's at times like these you fight impotence.  I needed an editor cut this film. My editor was not convinced with the idea. My music choice. The poem. It's at times like these doubts set in.

There was so much I needed. People, resources and some luck. I needed free music, free images, free production facilities. I need the NHS to give the project it's official backing. I also needed to prove the idea would work.

I needed a marketing plan. For a long time it was vague. We didn't have one.

There are many lessons to be learned from the experience but for now the lessons are  -  trust your instincts and trust people.  Step into the arena.

Now I am going to blow some trumpets. Here's some of the feedback since the film was released:

Pete Stephenson, boss of The Edge Picture Company (who was a big supporter and believer) -

'Just wanted to say another huge congratulations on this film Tim. It feels like a real labour of love and I’m sure that it nearly killed you getting it over the line! But it was so worth it and so full of emotion. You should be very proud.'

'I cried as I watched Michael Rosen's 'These are the Hands' a Fund-raising ad for NHS Charities Together: from @BFI and @evcomur How the NHS has cared for us for 70 yrs.  The most emotional 1 minute 50 second film I have ever seen! DON"T MISS IT - massive!'

Paul Widdowfield, Communications and Marketing Manager, Harrogate and District NHS Foundation Trust -
'It's a great film and a brilliant watch.'

'It is beautiful, can’t imagine anyone not being deeply moved after seeing it.
…..shared it widely, and crying lie a baby….'

Tags
These are the handsEVCOMBFIthe edge picture company