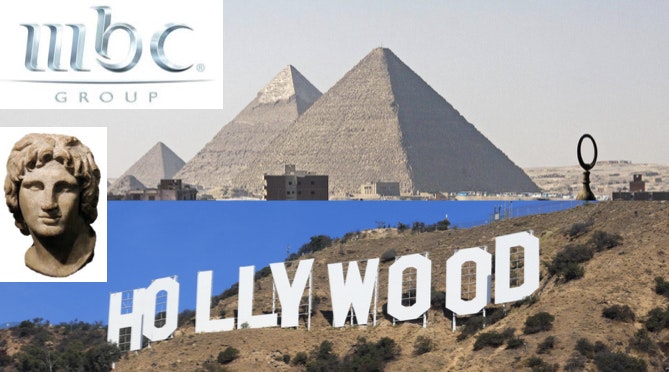 Rambling on - Career true stories. You couldn't make this up - even in Hollywood or Egypt...

This is a true story.

When I worked as a producer/director for MBC - Middle East Broadcast Company - in London, during its haphazard fledgling days I met many people from the Middle East. One of them, a debonair, tall man with matinee idol looks was introduced to me by one of my Egyptian presenters. He, I learnt, was descended from the Egyptian royal family (who had long been ousted) and I suppose i might characterise him as a bit of a playboy. Hard to dislike. Charm personified. We subsequently met again in Cairo. He took me aside one day and showed me a screenplay for a movie about the life of Alexander the Great. This was to be major historical movie set in Egypt. His pitch was that through his influence he was going to arrange the locations and supply the extra's for the battle scenes - or as he put it "I will supply the army". He continued - there were thousands of Egyptian army conscripts not doing a fat lot and because of his connections he could set up a deal. "Was I interested?" Not as an extra with sword and sandals but he needed someone with technical knowledge; some kind of production manager type. I wasn't exactly qualified myself but hey, why not? Naturally I would be delighted to be part of this production. It would be my entre into the world of Egyptian feature film - I had long harboured a fantasy, at MBC, that my way into movies would be via the Middle East and at that time the most famous films came out of the Cairo studios.

I remember one scene from that script. Alexander the Great walks into some kind of amphitheatre-like forum full of senators who are, and I quote 'networking' like crazy.     So let's just conclude this historical epic was written by an American.

I have arrived in an underground carpark with a producer after spending 3 weeks travelling America researching a film treatment that I was calling Black Country Cowboys. That is a long story. For now - the producer from London, who I had previously 'pitched' the idea to, has arranged a meeting with a big time Hollywood producer buddy. I will have 5 minutes to pitch my idea. "Is the story true then? Now that you have researched it". Err, not exactly I mutter. It's complicated. "Well", he says,"don't worry because no one cares about the truth here".

I'm nervous, the humidity is killing me, my white shirt is hanging over my jeans (actually this was out of sartorial choice). The producer leads me to the entrance of the Amercian producers company telling me to tuck my shirt in. Just like my Mum. On arrival there is a phalanx of company exec's, assistants waiting to greet us. We walk down the line like the VIP's we are, the new hot limey's, shaking hands, introductions and then led into the big man's - the hot shot's - cavernous office - come man cave - come aircraft hanger of an office. It's bedecked with huge framed photographs of Daryl Hannah (he was dating her) and, I kid you not, said producer is wearing a medallion and a loose buttoned shirt with bronze glistening tan and grey, grizzly hair springing forth in our general direction. He's got's a man in a courtroom, a reporter - he tell's us - who will be dialling in with the outcome of a very famous trial because he's got a writing team on standby to re-write the ending.

Cut to the chase. I get my 5 minutes to pitch. He throws a curve ball "who have I got in mind for the love interest?" The girl. Who would be my male lead? I had never given this the slightest thought. This was a serious drama-doc, all be it of epic, historical proportions. What then follows is that the English producer turns to me and says do you mind if we speak in Hebrew? They speak. I look around. I am a boy in small trousers in a mans world. Still I have got a shot with a Hollywood producer. Dating Daryl Hannah no less.

Then. In English. The American hot shot says look if you will invest in my new project maybe I will consider this kids idea (he didn't actually say "kid" by the way but by now I felt like an 'extra' in my own film that I had thought I was directing). Hot shot producer turns to my producer and says "I'm looking for around 10-15% of the budget for my picture". You will get the European rights. We can trade. This picture I am gonna make - big, historical epic.  Got Franco directing. Franco Zeffirelli. No less. Here's the screenplay.                          And the movie's title ?

True story (mine that is). It was a new draft of the script I had been presented with in London and Cairo. Only this time there's no Egyptian army. It's all going to be shot in Greece and Italy. But wait - those senators what are they doing? Yes they are still 'networking' like crazy.

Eventually many years later Ridley Scott made the film. I think he cut the 'networking'.