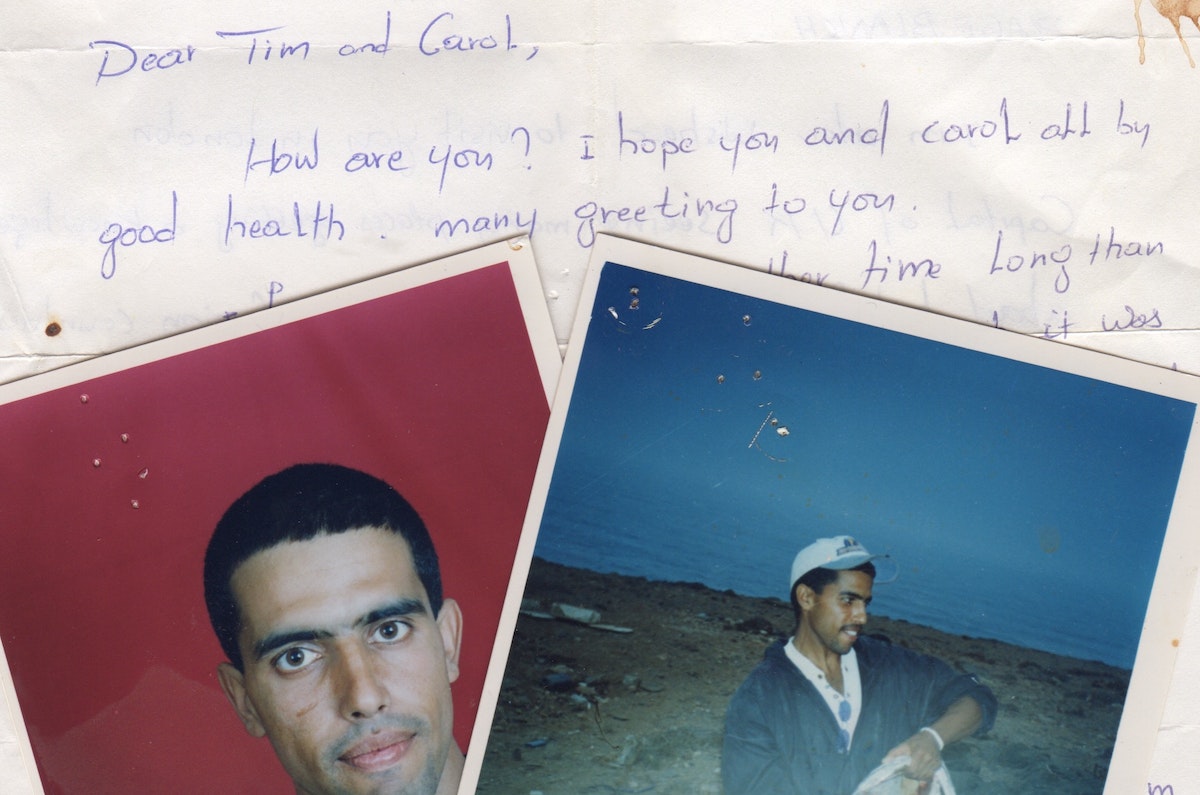 Lessons learnt from a ﻿chance encounter with Ali from Guelmim, Morocco... ﻿or/ The unexpected power of the BBC and the lure of immigration

It was probably at least 20 years ago when Carol and I explored the area in the south of Morocco around Guelmim. That part of sub-Saharan Africa is best known for the 'Blue men' who trade camels and (guess what?) can be spotted by their dazzling, natty blue flowing robes - although eventually you realise almost every male appears dressed in blue.

Meeting Ali and his transistor radio

I recall we had wandered off on a hike towards the coast in an area called Foum Assaka and then we spotted a man from afar heading towards us. I don't want to go all Laurence of Arabia meets Omar Sharif in the famous desert encounter at the well scene but I will employ the cliche - he really did appear as a speck on the horizon intent, at speed, on heading directly towards us. Not a Blue man but a young man of around 18 years of age or so who introduced himself as Ali Bouassrya of Foum Assaka. Farmer and fisherman. His English was pretty good. In one sense he desired of us that we share his well insisting we go with him to his home for tea - a farm high up on a bare hillside. The farm was like a stockade, adobe style with a few goats and hens running amok. It appeared to be quite impoverished. Inside we met his mother who baked bread for us. It was Ramadan and yet they demanded we eat and drink whilst they continued their fast. Ali proudly showed us his spartan room and what stood out was an old fashioned transistor radio beside the window. This he explained was how he learnt his spoken English. It was permanently tuned to the BBC World Service and every day he listened to broadcasts and tried to improve his English vocabulary. To him it was a lifeline to education because he couldn't afford to go to university (in that part of the world the poor are excluded from higher education) and the BBC was his teacher. He was thrilled that he had met two people from England - the home of the BBC - who he could converse with. He was, to use a high faultin' noun an 'autodidactic'  - self-taught.

So - the first lesson for me was about the power of the BBC but in the most unexpected way. That for this poor man, excluded from education because of his background, the BBC had become the means to learning some rudimentary language skills. He didn't fully understand the content of the reports or programmes but he was, through sheer diligence, acquiring knowledge. His bright-eyed enthusiasm for this BBC service that we take for granted was really very humbling. Worth remembering when we quibble over the licence fee.

And of course those language skills had mean't that he could converse with two foreigners on a hillside. He and we hadn't been reduced to some mad sign language to communicate but he had acquired the skills to communicate in the universal language of English and it enabled him to convey a sense of himself - in other word's he was no longer to be reduced to 'just a foreigner' who could be belittled. He had a voice.

The second lesson - was about how conflicted he was about immigration. He told us the story of friends who had a boat and were sailing it to illegally enter Spain via the Canary Islands. Usually they all went out fishing in the Atlantic which he had a passion for but now this small vessel was their means of escape from the unemployment and frankly feudal existence of their lives. Yes it was dangerous - but it was worth it because there they could get a job as a waiter in Spain. He was contemplating whether to make the journey himself. He had ambitions and desire - like any 18 year old - but he needed to help his Mother and Father on the  farm and of course if he left them then these two elderly parents would be left to somehow manage on their own.

I can only imagine how he might be eaten up with guilt if he left (and who knows whether he would survive that Atlantic journey?) and yet the horizons of a new life that all his peers were flocking to was so tantalising a prospect away from the limitations of this farm on a scraggy hillside. Perhaps his peripatetic English education, courtesy of the BBC World Service, had induced in him a sense that he could do better with his life. Perhaps it had fuelled a young mans ambition. That's the trouble with education...Your horizons can grow. It's worth remembering this was 20 years ago - the immigration debate had not taken hold in Europe at that time.

Postscript to this story

The postscript to this story is that we collected books and materials for him that would further his English education and posted them on. A while later we received a letter from Ali which was really well written. At the end he wrote (and I have reproduced it as he wrote it rather than correct his grammar like a teacher might) -

'I'm also wished to visit you in london Capital of UK seeing many places, getting knowledge about british Civilisation but to visit foreign countries it is difficult but I hope. I'm ambitious to visit foreign Countries.